My daughter and I did the Urban Assault Ride on Sunday. What a blast!

We had a pretty good idea for our riding course going into the race, but knew we had to adjust it based on the mystery checkpoints that were revealed during the race. But the checkpoints lined up perfectly with our plans, and put us into safe spots (read: bike paths) that weren't out of the way.

We started at Olin Park and since we performed well (70%) on the pre-race quiz, we were put in the first wave of racers. Little did we know that the race started with a run! We quickly fell to the back of the pack as we ran around a circle to get back to our bikes. When I looked back at Emma leaving the start on her bike, there was a huge pack of runners baring down from the second wave. I wish I had a camera for that...

The first mystery checkpoint was the Willy Street Co-Op on the near East side - a nice scenic route hugging Lake Monona with bike lanes the whole way. We picked up our bead and got the second clue, which was the Trek vending machine at Machinery Row (Emma even noticed the UAR official sitting there on the way past the first time).

The next mystery checkpoint was a riddle which pointed to the zoo, and we were faced with our first fork in the plan. I had a pretty good idea that we weren't going to make every stop in the race. Too much time and too much mileage for a nine year-old.

We could either head to the zoo which was on the way to the cluster of checkpoints on the far west side, or we could skip over ten blocks in the opposite direction to hit up another checkpoint that involved getting in the lake. It made sense to skip the lake stop. It was the wrong direction and it would put is in a spot with limited bike paths which I wanted to keep Emma on whenever possible. So off to the zoo we went along the Wingra bike path.

We went into the zoo on the wrong side, but walked past the buffalo's, bears, and seals (and stopped for a potty break) and got the checkpoint at the front entrance. Then the work really got started... the long trek out to the west side checkpoints on Mineral Point and Old Sauk Roads. Little did I know going into it, but it was up hill the entire way. Some steep spots, but mostly just a steady uphill climb. I think Emma started to question why she signed up for this adventure about half way out. Even her lowest gear was failing to relieve her stress.

But we stopped a couple of times, drank lots of water, and she persevered. We found another bike path that hugged the beltline and biked right in the front entrance to West Towne Mall. We briefly considered biking through the mall - it would have been a blast but Emma, the rule stickler, was afraid we might get disqualified. We reached the REI checkpoint and had to complete a human wheel barrel challenge. Emma was the barrel and I pushed, and while we finished the challenge quickly we decided to take advantage of the shade and took a few minutes to rest after the long haul from the zoo.

The next stop was just around the corner at the Princeton Club. There we had to pick up wooden poker chips while wearing oven mitts and being sprayed with water by onlookers. Very fun, and it was nice to get cooled off a little.

The next stop was a hop, skip, and a jump away at Trek Bikes. This was the limbo contest. The trick being you had to get under the bar while riding your bike. Emma and I did really well on this one, but in many ways it didn't matter. One of things I didn't like about the challenges is that you weren't really rewarded for doing well. Not only could you "get your bead" after failing some number of times, but all of the volunteers cheated for you. They either gave you hints about doing a trick or in the case of the limbo, they held the bar up!

Now we were forced to make another decision about how to proceed. There were two more checkpoints two miles in the opposite direction from the finish. We were also within twenty minutes of the time limit for the challenge stations. So we decided to make a dash for the finish. Another long haul back. The good news was that was pretty much all down hill. We found our way back to the Southwest bike path, went back through Vilas Park, and back on to the Wingra path until it ended at Olin Park - the finish!

There were two challenges left. A big wheel race - on big wheels with rear breaks that let you have great spin outs - and a race through a blow-up obstacle course. At last we were done... six out of the nine checkpoints complete in three and half hours. Very strong effort from team Sharendipity!

Oh, and we finished in third place in the family division! I'm not sure about the second place team, but I know the first place team was on a bike + trailer so I don't look at is as though we lost. What Emma did was incredible. In the end, we put in 25 miles! That's just flat out incredible for a nine year-old. Go Emma! 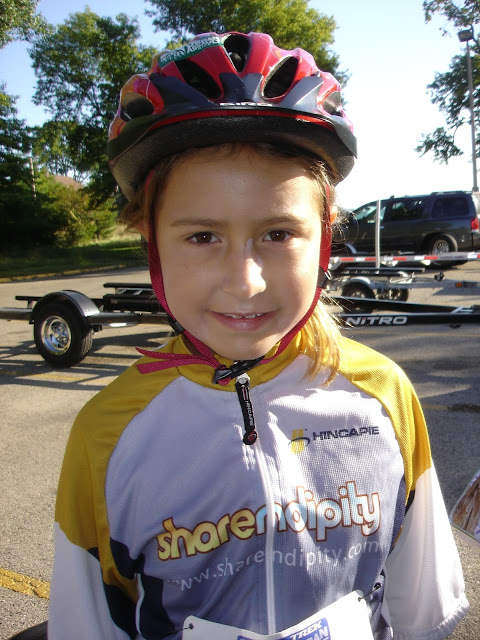 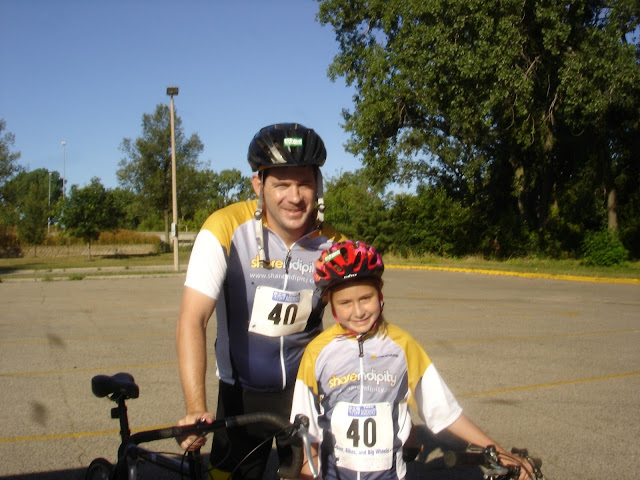 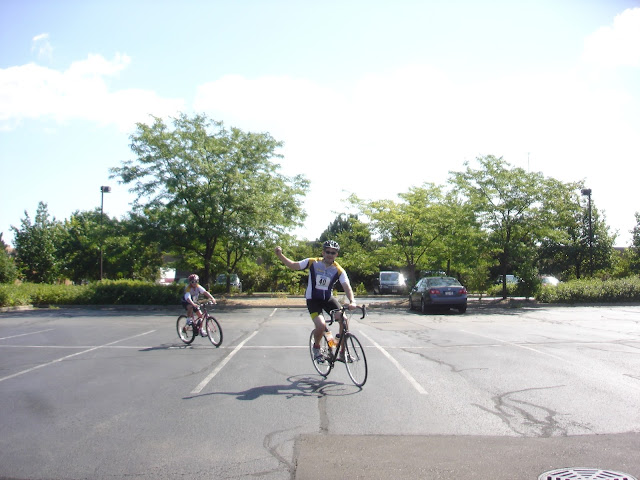 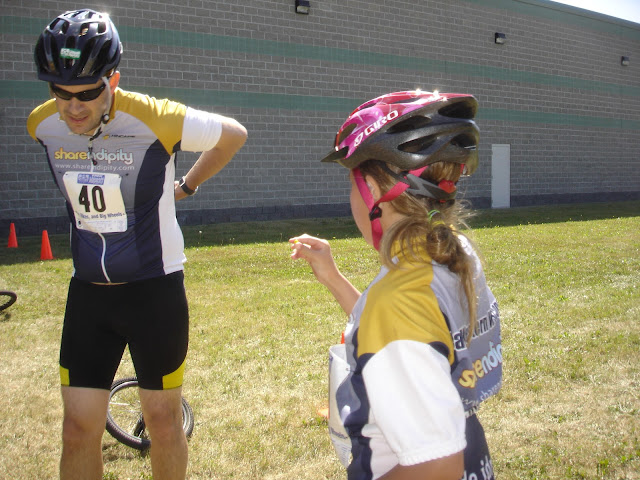 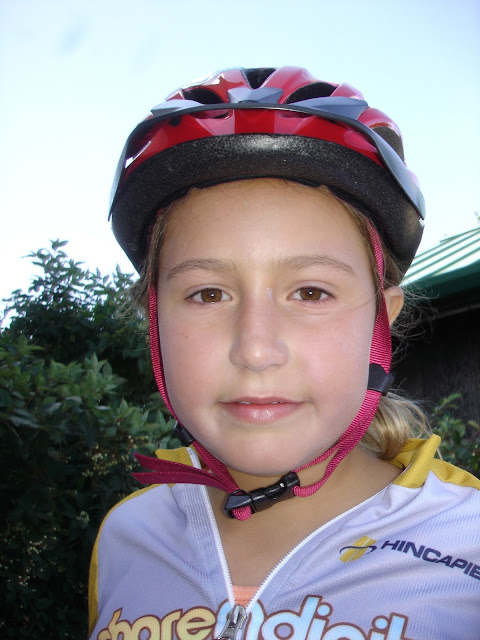 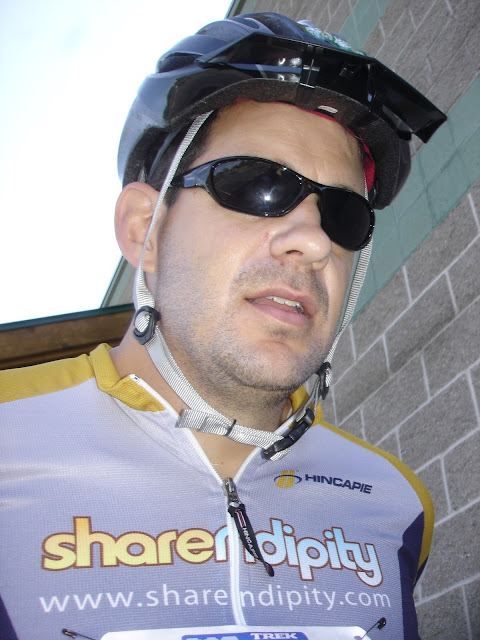 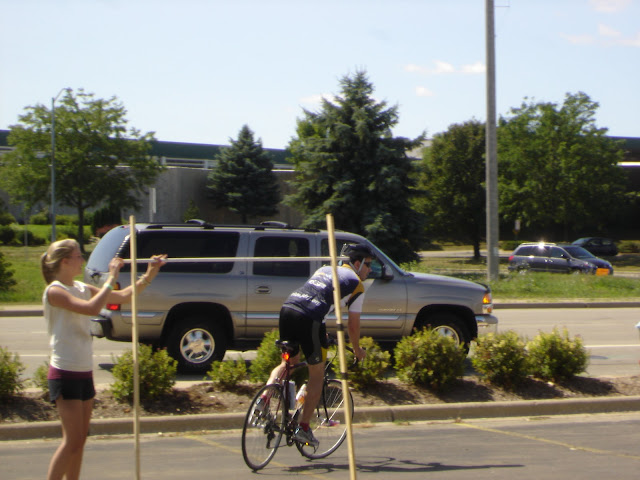 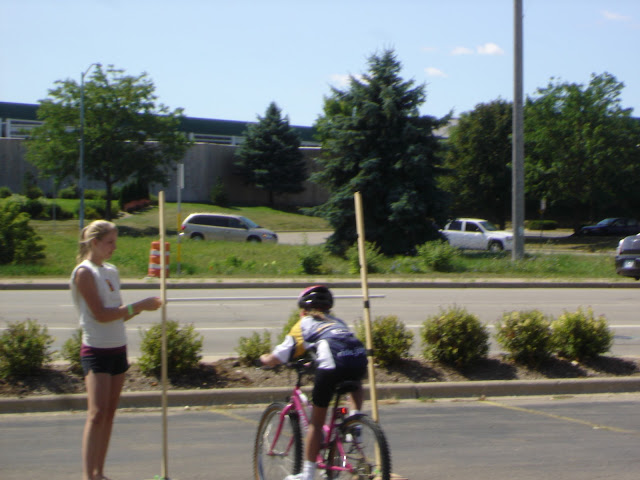