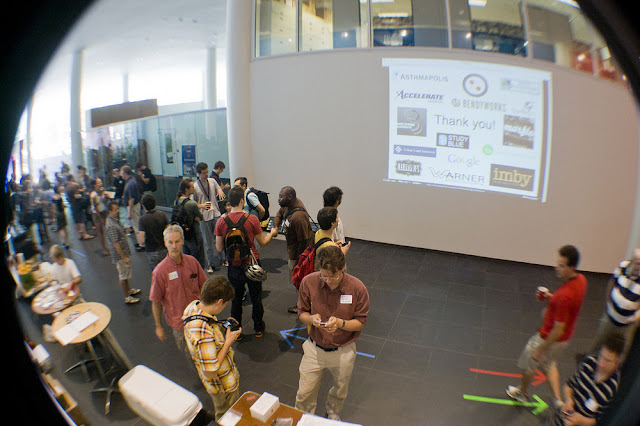 We had another terrific Barcamp event (dubbed "MadCamp") this year. Supported by great sponsors, a great community of learners willing to share their time, and the tireless effort of Phillip Crawford to pull it all together; it was a proud day for Madison.

Urban Land Interest provided a great venue right on the Capital Square. But it wasn't without its challenges. MadCamp sessions were spread out across three floors - with six simultaneous sessions. Attendees had the challenge of getting back to the session board on the first floor and reviewing the options, finding the next room and still use the fifteen minute break to network with other attendees. To limit the burden of foot travel, we did two things.

First, we put the session board online using Google Docs and projected it on a giant wall on the first floor. This not only enabled people to view it from anywhere on their own devices, but it allowed multiple people to edit it at the same time.

Second, now that the session board was online we were able to setup a notification system that could read from Google Docs via the Google Data API. The MadCamp Notifier was born. The notifier would use the Twilio SMS API to send every (subscribed) attendee a list of the next set of sessions every hour that included the session title as well as the room number.

So I think there's a product here somewhere. A better way to organize and connect with others at an event. A free idea! Who's going to take it? If you want a head start, here's the MadCamp code... http://github.com/gtracy/madcamp-notifier

Incidentally, both Twilio and Google were sponsors of MadCamp so in many ways, this app was our thank you note.